According to British Standard BS 476, aluminium is described as non-combustible. The same set of standards gives aluminium high marks on the fire resistance versus spreading scale.

It is extremely useful to examine aluminium's behaviour under fire conditions, with reference to its relevant properties.

Most Aluminium alloys have a melting point between 600 and 660 degrees Celsius.

Therefore when aluminium is exposed to a prolonged fire environment it will begin to melt (not burn), provided that the metal's temperature passes the melting point. 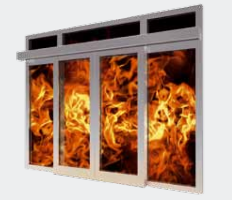 Aluminium's heat conductivity is, approximately, 4 times greater than iron's while its specific heat capacity is similar to iron. Aluminium's extremely high reflectivity compared to iron (aluminium ranges between 80 to 90%, and 5 to 25% for iron to stainless steel) allows for better resistance to thermal radiation of fire.

So when aluminium is exposed to fire, its large thermal conductivity allows it to quickly dissipate large amounts of heat from the flame and absorb even more thermal energy from the centre of the fire, 'cooling' the environment and restricting 'very hot spots'.
These heat levels are comparatively greater than those of iron when exposed to fire, therefore aluminium offers a comparatively higher response time to fire fighters.

Aluminium will start melting if the fire continues and the temperature passes the melting point.
In such a case, for example an aluminium roof that is melting over the fire source, the smoke and large amounts of heat are released through the opening in the atmosphere, making it easier for the fire fighters to do their job.

Proper fire planning of modern structural elements can offer several solutions, such as sandwich panels with fire-resistant or flame retardant materials.
Besides, by increasing the thickness of the aluminium shell of the panels, the thermal capacity also increases, thus offering more time for fire fighting.
When aluminium melts, it begins to ‘act’ like fire-resistant or flame retardant insulation, providing even more protection time.

Regarding personnel safety, the radiation protection provided, for example, by an aluminium 'cage' around the fire escape of a building is very important because it protects the escape route from high temperature radiation (high reflectivity of aluminium).

It must be noted that the mechanical strength of structural aluminium has very safe use limits, up to 250 degrees Celsius, approximately.

Subsequently, its fracture and yield point are reduced. Through appropriate alloy design, aluminium load bearing systems can reliably withstand up to 300 degrees Celsius.

The fire-protection gained through the proper use of aluminium has lead to its extensive use in oil platforms. 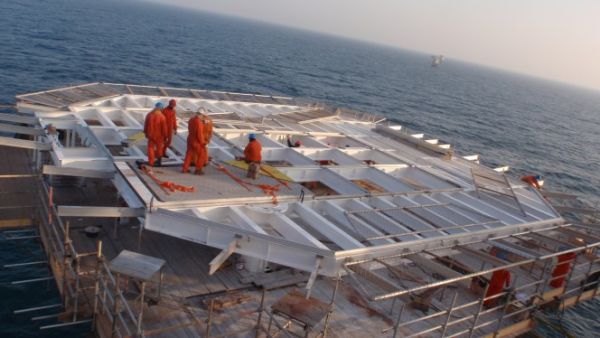