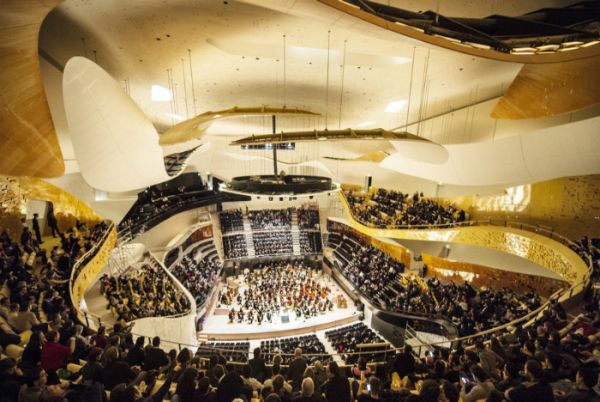 Designed by renowned architect Jean Nouvel and featuring a 2,400-seat auditorium, several rehearsal rooms, and spaces reserved for learning activities and temporary exhibitions, the new building has ‘innovative architecture which blends into the Parc de la Villette, on the edge of Paris and in the heart of a speedily evolving metropolis’ according to the concert hall’s web site.

One who is not impressed, however, is Nouvel himself, who accuses the project managers of cutting corners to save money during construction. The architect took legal action to have his name and image removed from all references to the work. The final as-built product, he said, displayed ‘contempt for architecture, for the profession, and for the architect of the most important French cultural project of the new century.’ In a blistering editorial in French daily newspaperLe Monde, Nouvel wrote that the architecture had been ‘martyred’ and the detail ‘sabotaged’ in such a way that ‘taxpayers will have to pay, once again, to correct these aberrational decisions.’

While Nouvel’s action was unsuccessful (the court found he had not provided sufficient evidence that his designs had been flouted), the case raises interesting questions surrounding the legal rights of architects or architecture firms in cases where they feel their work has been ‘adulterated’ and the final as-built product does not live up to their original design. Given the potential reputational impact associated with being linked to what they feel is a final product which is not  up to scratch, can architects demand changes to bring the building up to standard with that designed, or at least have their name removed from those which do not meet the design?

First, under the Copyright Act, architects are generally acknowledged as the authors of the ‘artistic work’ of the design and plans, and they receive copyright protection commensurate with that recognition. Presuming it is built appropriately to the design, the architect will also be recognised as the author of the final as-built product. This may not be the case if the final product differs markedly from the design, however. In these cases, it is possible that the builder rather than the architect becomes owner of the built product for copyright purposes.

Second, under a typical contract, the architect will usually either license or assign the copyright for the design in question. Where the work is licensed, the architect retains ownership of the design copyright and simply allows the client to use the design under a licensing arrangement according to the terms and conditions specified within that specific arrangement. In the latter case, however, full ownership of the designs and associated copyright is transferred to the client, who will then be free to use them for any project and in any way in which they choose.

Third, there is the issue of moral rights. The architect has the right to be suitably and appropriately recognised as the author of the work and not have others falsely credited with authorship. Perhaps most relevantly, the architect also has the right to have the work used in a manner which maintains its integrity and does not treat the work in a derogatory manner through, for instance, substantial distortions of the work or public displays which are performed in such a manner that adversely impacts the architect’s reputation as author of the work. Unlike copyright ownership, moral rights cannot be permanently waived or assigned, although they can be waived in individual circumstances.

Finally, moral rights do not provide a right to avoid being identified as the owner of a work. Where architects have their name associated with something that they did not in fact author, the only one who can complain is the true author of the work.

What does all this mean?

Where this is not the case and the architect instead retains copyright ownership and allows the client use of the work under a licensing arrangement, on the other hand, the question of whether or not the architect can have their name removed from  the built form – or indeed, in extreme cases, prevent the work from being adulterated or demand remedial work or structural alteration to bring the built form substantially up to par with that specified in the design – will depend entirely on what is specified under the terms and conditions under which the work was licensed.

For this reason, O’Brien says it is imperative for all terms and conditions to be clearly specified in the agreement, including the circumstances under which changes or alterations can be made to the design and the type of changes that are or are not allowed.

“This is all about agreement between the parties,” O’Brien said. “They have to agree on what is and what isn’t able to be changed. And if changes are to be considered, then they should already have an agreed process in place to deal with that.”

How about the other side of the equation, where designs are not adulterated or ‘martyred’ but in fact copied? What does the law say, for instance, in cases where the client has gone and used the designs not for the project in question but for other projects as well. Again, O’Brien says, the matter will come down to whether the copyright was licensed or assigned – the client assuming full ownership to the designs and being free to use them as they see fit in the case of assignment but the respective rights of each party again depending on the terms and conditions of the agreement where a licensing arrangement is in place.

How about the rampant copying of work by another architect unrelated to the client altogether? Assuming the architect has licensed rather than assigned their work, and the alleged copied work is indeed a substantial replica, then they could either seek injunctions or damages for breaches of copyright or moral rights.

Rightfully so, many architects in Australia are passionate about their work, value their reputation, and are happy to put their name to a final product which accords with what was designed.

Whether or not they can have their name removed from any as-built product where the design has been ‘martyred’ will depend on the degree to which the building has departed from the original design, and any terms under which it has been licensed which might have the effect of allowing the architect to ‘disown’ the final product.

END_OF_DOCUMENT_TOKEN_TO_BE_REPLACED 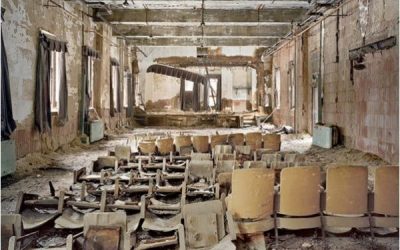 After all, it is the new building that realizes best their ideas, hopes, aspirations, and the prospect of its being diminished over time amounts to their diminishment, as well....