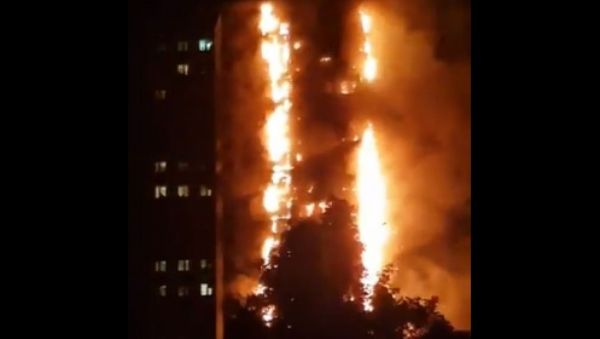 And authorities have known about the dangers of this cladding for nearly two decades while doing nothing about it, it has been claimed.

At the same time, the NSW Government has also been accused of not doing enough now to warn apartment residents of the dangers they could face if they have highly combustible cladding on their buildings.

A view of an apartment in the Grenfell Tower after fire engulfed the 24-storey building, in London. Photo: Met/AP

In the Four Corners report, experts claimed that long after the most dangerous form of cladding had stopped being used in Europe, it was still being supplied to the Australian market because the supplier said they didn’t have to provide fire-resistant cladding and, “it’s cheaper to stay with polyethylene”.

In recent years, Australia has been swamped with cheap versions, mostly from Asia, of the composite cladding which has caused the rapid spread of fire in buildings like Grenfell Tower in London where over 80 people died, the Lacrosse building in Melbourne and The Torch in Dubai. It is basically a layer of highly flammable polyethylene sandwiched between two sheets of thin aluminium.

It is popular with architects, developers and builders because it is light, attractive, easy to use and relatively cheap, and has been installed on high rises across Australia over the past 20 years.

Authorities said it was extremely lucky no one was killed in the 2014 Lacrosse fire. Photo: Gregory Badrock

The program alleged that certifiers and fire engineers have been approving the product even when they knew it wasn’t safe, and deregulation, privatisation and self-certification had exacerbated the problem.

The report also showed a Federal Government select committee being told that, although there were building standards, they could not be complied with. Even when the dangerous cladding was discovered, the question then arose of who should pay to remove and replace it.

A massive fire broke out in one of the world’s tallest residential towers, the Marina Torch in Dubai. Photo: Rhea Saran/Twitter

“This is an absolute legal minefield as to who is responsible,” crossbench Senator Nick Xenophon told the show. “The potential litigation, the insurance claims, the finger-pointing between various authorities and contractors is enormous.”

The cladding scandal has also engulfed NSW Innovation and Better Regulation Minister Matt Kean who was slammed by Opposition MPs at a Budget Estimates hearing on Monday afternoon for allegedly not doing enough to protect the state’s apartment residents.

Last month, the Department of Fair Trading sent out letters to the strata committees and building managers of 1,041 buildings with potentially unsafe cladding, asking them to engage an appropriately qualified fire safety expert to check whether or not they were a fire risk.

But critics claimed that all residents should have been warned, particularly as there were no time limits nor penalties if strata committee members failed to act on the warnings. They might ignore the letters and sell out themselves before the cladding became public knowledge and affect the value of their properties, because owners would be faced with the cost of removal and replacement.

“If I am renting one of these properties and have a couple of children am I going to be told by the department that I might be living in a home that has suspect cladding?” asked Labor upper house MP Daniel Mookhey​.

“Do you not agree that if people are raising a child in a house like that and the Government is aware or at least suspicious it should have a protocol in place to tell them? That is highly alarming, is it not?”

Last month, Minister Kean issued a press release announcing a 10-point plan on fire safety. He told the hearing, “Let us not get ahead of ourselves. What we are asking them to do is to check whether or not they have cladding …

But the Shadow Minister Yasmin Catley said he still hadn’t provided any details as to the location of buildings, costs to remove the cladding nor who would ultimately pay for its removal.

“One month after his press release and the Minister can’t answer some of the most basic questions on this matter: Where are the buildings and who will pay?” she said.

“Minister Kean hasn’t even attended a meeting of the taskforce he created to rectify this situation. The public have a right to know where this dodgy product is, and who is going to pay to fix the problem. At the very least the people living in these unsafe buildings have a right to know.”

Strata lawyer Stephen Goddard, chairman of the apartment owners peak body, the Owners Corporation Network, said, “I have more consumer protection buying a refrigerator than a $1.5million apartment. How can that happen?”

He told the Senate committee, “Gentlemen, you have no option to kick this down the road another five years. There has to be a level of accountability.